Whether in time of revolution or in time of peace, the worker must be housed somehow or other; he must have some sort of roof over his head. But, however tumble-down and squalid your dwelling may be, there is always a landlord who can evict you. True, during the Revolution he cannot find bailiffs and police-serjeants to throw your rags and chattels into the street, but who knows what the new Government will do to-morrow? Who can say that it will not call in the aid of force again, and set the police pack upon you to hound you out of your hovels? …

Now the worker must be made to see clearly that in refusing to pay rent to a landlord or owner he is not simply profiting by the disorganization of authority. He must understand that the abolition of rent is a recognized principle, sanctioned, so to speak, by popular assent; that to be housed rent-free is a right proclaimed aloud by the people

Are we going to wait till this measure, which is in harmony with every honest man’s sense of justice, is taken up by the few socialists scattered among the middle-class elements, of which the Provisionary Government will be composed? We should have to wait long–till the return of reaction, in fact!

This is why, refusing uniforms and badges–those outward signs of authority and servitude–and remaining people among the people, the earnest revolutionists will work side by side with the masses, that the abolition of rent, the expropriation of houses, may become an accomplished fact. They will prepare the ground and encourage ideas to grow in this direction; and when the fruit of their labours is ripe, the people will proceed to expropriate the houses without giving heed to the theories which will certainly be thrust in their way–theories about paying compensation to landlords, and finding first the necessary funds.

On the day that the expropriation of houses takes place, on that day, the exploited workers will have realized that the new times have come, that Labour will no longer have to bear the yoke of the rich and powerful, that Equality has been openly proclaimed, that this Revolution is a real fact, and not a theatrical make-believe, like so many others preceding it.

Peter Kropotkin, The Conquest of Bread

The lines of fissure in capitalism are many. No one single contradiction, if any, marks it.  It is, as with any society, a conjunction of social relations, relations of oppression, in permanent re-constitution.  To then identify amidst this complex composition a single relation (capitalist-worker) as definitive is illusory (which does not thereby mean that that relation is secondary or irrelevant).  But if we begin from the idea that capitalism is a confluence of social relations constructed and sustained on the basis of the private appropriation of common creative activity, then the battle lines in the war against Capital are plural.

Among the virtues of anarchism in relation to marxist inspired sociopolitical movements, it is the historical recognition of this plurality.

The mass social movements, post-2011, testify to this plurality.  The occupation of city squares and the organisation of assembly based self-government in numerous domains of collective life are radical examples of this.  Whatever fragility marked these movements, they remain emblematic as instances of peoples’ desire and capacity to organise themselves autonomously.  And the engagement of anarchists with these movements is something from there is much to learn.

In spain, the “La Esperanza” okupation on the island of the Gran Canaria is one such instance.  In early 2013, at the initiative of the Federación de Anarquistas de Gran Canaria (FAGC), some twenty apartments were occupied, providing housing for dozens of people unable to meet their most basic of needs; today they are some 71 families, made up of 250 persons, the majority of which are minors, occupying a residential complex baptised “La Esperanza”/”Hope”, the largest residential okupation in spain and the largest experiment in libertarian self-management in the country, carried out by people who are not for the most part anarchists.

The role of the FAGC has nevertheless been central throughout this whole process and this in a context of extreme economic hardship.

In early 2013, unemployment on the Canary Islands stood at 35%, with house evictions during that same year reaching 4,000.  Today, more than 30% of the population of the archipelago lives below the poverty line, with some 16% of the Islands’ families having all of their active members unemployed.  This poverty then manifests itself at various levels, among which housing; on the Islands, there are 130,000 unoccupied houses and some 21,000 families in need of homes. (La Columna.Cat 27/12/2015)

Housing is thus a territory of struggle …

We share part of a text by Ruymán F. Rodríguez of the FAGC that appears below in translation:

The Right to a Roof

From an anarchist perspective, few lines of struggle today open more expectations than that of housing and evictions.  It is a domain that, directly or indirectly, touches everyone; that strikes the poorer classes and undermines the reality of those held to be “middle class”; that breaks the barrier that existed between the “sedentary working class” and those “without class”, the indigent (today not having a roof over one’s head is no longer understood as an “anomaly”, but as a dangerously close possibility).  It is one of the contradictions of capitalism that most facilitated having us all agree on the flagrance of its injustice (there are few who would contest initiatives that aim to stop evictions).  It is a problematic that reveals the incompetence and iniquity of the totality of the System, that effects everyone through its institutions and mechanisms (banks, the State, law, private property, the police, etc.) and that calls for measures of a nature that are suggestive for libertarianism (measures, many of which, violate the principle of legality): resistance against evictions, occupation, boycott and sabotage of the tentacles of the  capitalist system, unmasking the hierarchical structure to its ultimate consequences, etc.  As we can see, there are more than enough motives, theoretical and practical, for the anarchist movement to throw itself fully into this question.

And yet, a radical politics around housing is not new, for rent strikes for example can be traced back to the early 20th century, in europe and in the americas, and 19th century radicals both commented on the matter and endeavoured to put into practice various forms of “socialised” housing.  And what has always been radical in this regard has been both the objectives sought and the means employed: direct action and mutual aid.

We anarchists persevere in the idea that for a right to be such, that it cannot be conceded by a third; it has to be taken, conquered.  We did not arrive at this conclusion through a faithful observance to 19th century texts or to the past, but through everyday experience.  The System only concedes (gives something generously) when it believes that there is something to be gained in exchange, when it fact it gains more than it gives; it only gives way (to lose something in favour of a rival) when it has no other choice, when it is forced to do so.

There are today many examples, in Seville, in Catalonia, in Gran Canaria (modestly) that this can be done.  This means, in fact, [in the case of housing] the socialisation of a roof, forceful expropriation against the State, the banks, companies and large property owners who promote the fact that there are as many empty houses as there are people without houses.  It assumes a frontal confrontation with the reigning legal order, a conscious violation and evaluation of the counter-right to private property.  Socialisation is a path on to which we have been pushed by circumstances, a path that anarchists must join completely, and not necessarily to create spaces for “self consumption”, but to put into practice the basic aspiration for the use and benefit of something that belongs always to s/he who needs it most, to offer a radical alternative to problems which until now have only been addressed at the level of their effects and not their causes, to propose solutions that touch the roots and not the surface, to prevent the struggle for housing from becoming a private struggle for private interests.

In the end, we have to create, until they reproduce like a pandemic, assemblies of renters, of those with mortgages, of the evicted, homeless, etc., where we can organise ourselves, exchange information, chose objectives, construct.  However, one does not have to limit oneself to this.  To expropriate abandoned buildings for evicted or homeless families is an end in itself, but not the only end.  The question should be to try to grasp the iniquity and uselessness of the very structure of the System, it should be to propose expropriation as an “offensive solution”, as an attack against Capitalism and the laws of the State, as a way to damage Power, and not be simply a way of escaping from the System.  The opposite is counterproductive, as is testified to by the historical example of the cooperatives.  … In the same way, even though the occupation of abandoned houses or lands is, as we have said, an end in itself for those who benefit, we must try not to assume that this is the only end.  One must seek to generate social conflict so that it is understand why people are obliged to free buildings in opposition to private property.  Each occupation should generate new occupations, each time more massive, more public and with greater demands.  Otherwise, the State itself will in the end applaud surreptitiously as certain buildings are occupied (those that no one claims), if this serves to mitigate the attacks and the ire of the evicted.  Each empty house should be occupied, until no one is left exposed to the elements, but without this implying a lessening of discontent and indignation; on the contrary, it should be an incentive, a spur, to make evident the uselessness of the System and oblige us to go beyond it and destroy it.

In these conditions, the System cannot be seen but as a an enemy, and it is in this quality that it must be treated.

From what has been said, the objective of anarchists should be to devote themselves to this cause – that of bread and salt, of a roof and a shelter – and to be conscious of their historical responsibility.  Specific groups and organisations cannot lose another second more in reflecting on past revolutions when the moment of living those that announce themselves has arrived; one cannot speak of the poor as a laboratory subject when legions of the disinherited reach out to us and are disposed to break with legal taboos and throw themselves in to occupations of land and houses without any authorisation other than necessity; we cannot close ourselves in “libertarian cloisters” taking pleasure in the purity of a few ideas that are preferably hermetic and dead like a plasticized flower; we cannot comfortably seek refuge in labour unions that are not determined to develop a ferocious social labour and who do not understand that their work goes further than the world of labour and the collection of dues; we cannot lose time debating theories, authors and books, when in the street a war is being waged that demands our support.

The battle for housing is a reality; and it will continue with us or without us.  But before a people that is already employing instinctively methods of anarchist liberation, to us corresponds the obligation that they can rely upon those who are already familiar with these said methods, those who should radicalise circumstances before those in favour of parliamentary measures sell to us a victory that is in reality an armistice.

And today, it is La Esperanza that is threatened with eviction. 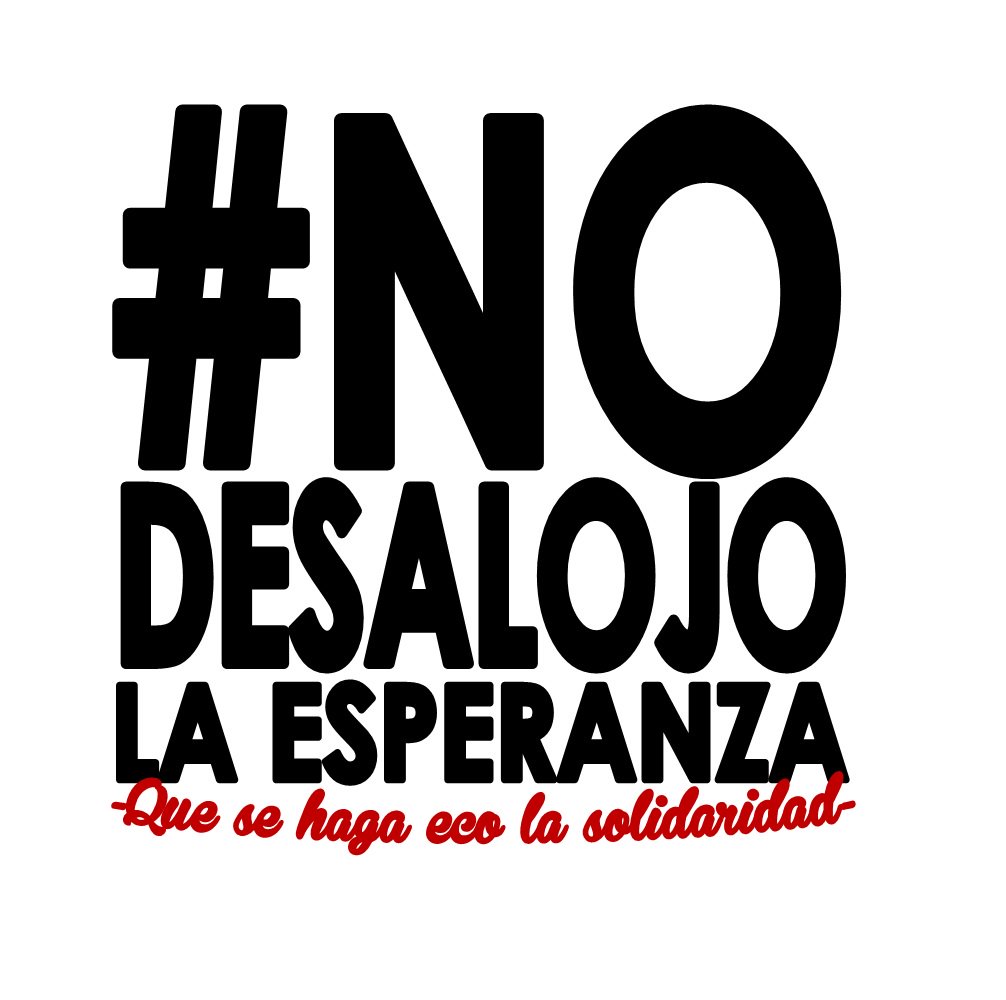