In one possible interpretation of the mythic figure of Pandora, she is not the harbinger/carrier of evil, but rather a source of gifts to humanity, a Gaia/Demeter like figure who shares with humanity what it requires to flourish.  It remains unclear whether the spanish police’s Operation Pandora is motivated by a Hesiodic, patriarchical reading of the story, or by a pre-Hesiodic, life-celebrating version of the tale; of course, very likely neither.  But what the spanish authorities may have unintentially unleashed is something of the latter.

In solidarity with the seven anarchists imprisoned under Operation Pandora, we publish a report, in translation, of protests in spain of the 27th of December, along an analysis from the spanish anarchist magazine, Argelaga …

More than 1,500 protesters demand the release of seven people imprisoned under Operation Pandora

The largest march was lived in Barcelona, but the day of protest was followed simultaneously in a dozen cities in Spain

Between 1,500 and 2,000 people participated in the Saturday afternoon demonstration in Barcelona in support of the seven persons imprisoned following Operation Pandora. The march began at quarter to six in the Plaça Catalunya, followed closely by a dozen vans of the Mobile Brigade (Àrea de Brigada Mòbil – also known as BRIMO). The police deployment, however, was minimal, as most of the Catalan riot command was on holidays. The operational leaders were sergeants and not sub-inspectors, as is usual, and was comprised of only two of the eight BRIMO units, based Sabadell. They had, however, reinforcements from the ARRO of Barcelona, who had been assigned the protection of the shopping centre Portal de l’Angel, the Justice Department and the CDC headquarters on Corsica Street. Simultaneously up to a dozen protests were held throughout Spain. In the center of Madrid a hundred protesters gathered, 200 in Zaragoza and dozens in Castellón, were some of the larger concentrations. Solidarity was also internationalized, with demonstrations today before the Spanish consulate in the capital of Slovenia and in Lisbon tomorrow.

“Terrorist is the one who condemns us to a life of misery, not the one who rebels against it”, was the slogan that opened the demonstration in Barcelona. This was contrasted with the slogan “The only terrorist is the capitalist State” and the crowd went in and out of El Corte Inglés and the ice rink that during these days occupies the Plaça Catalunya. The mile walk along the Paseo de Gracia would have taken place normally, except for the police vans that followed at a distance. “Terrorism is not being able to reach the end of the month”, “If you touch one of us, you touch us all” and “Ito, ito, ito, may the small bird fall”, in reference to the Catalan police helicopter that hovered over the march as it progressed, were some of the more commonly heard slogans.  The protest reached Gran de Gracia at which point some protesters broke with hammers crystals of bank, shop and a large hotel’s windows.

Banco Sabadell, La Caixa, Banco Santander, BBVA and Caixa Catalonia ended with broken windows as well as some multinational clothes franchises, as well as those of shops selling gold and silver.  The large windows of the Hotel Casa Fuster were very damaged. It so happens that this building was the consulate of Nazi Germany in Barcelona in 1936, shortly before becoming in the spring of 1937, the headquarters of the defense committee of the revolution driven by the CNT, FAI, the Libertarian Youth and the Iberian Communist Youth. The Phalange took the building again in 1939. After the transition, it was the scene of a renewed dispute between the city council and the local neighbourhood movement. …

The sound of broken glass preceded a warning of an “imminent charge” by the Mossos d’Esquadra issued over the Pas of police vans. Despite everything, the protest reached the Plaça del Diamant and was there concluded, without the riot being able to intervene against the bulk of the protesters.  However, some skirmishes between plainclothes agents and demonstrators were seen. In one of these actions, on Goya Street, a young man was retained, identified and then freed.

It is to be recalled that Operation Pandora, led by the Mossos d’Esquadra, unfolded on the morning of December 16th, involving searches of 14 buildings (Kasa de la Muntanya, the Ateneu Libertari del Palomar, the Ateneu Anarquista del Poble Sec and eleven homes); eleven people were arrested and seven of them imprisoned. Lawyers for the imprisoned explained that some of them are dispersed and and held under regimes of isolation …; spending twenty hours a day in complete incommunicado. Judge Javier Gómez Bermúdez signed the orders for admission to prison and, at the request of the Mossos d’Esquadra, agreed to extend the secrecy under which the investigation has been pursued for now two years, with multiple telephone interventions and monitoring. What the Directa was able to learn was that the unit of the Mossos d’Esquadra specialised in tracking the anarchist movement remains active against what it calls Coordinated Anarchist groups (GAC), which supposedly would be the target of what the cabinet’s press Department of the Interior´s press cabinet called an “operation against anarchist terrorism”.  Despite not being able to know the details of the case, on the basis of which the order was taken to send to prison seven anarchists, it was learned that two of the incriminating clues were the reading and distribution of the book Against Democracy and the use of the encrypted e-mail service on the server that offers Rise Up.

If there is one thing we can be sure of, it is the fact that the Spanish Government is not enjoying its best times. Up to its neck in a swamp of corruption and incapable of resolving either the difficulties posed by the restructuring entailed by the regional separatist movements (“soberanismo”) or the pressing economic problems that are crushing increasingly broader sectors of the subject population, it fears that its lack of credibility and its impotence will terminate in a State crisis that, faced with a popular reaction that is not limited to voting, could very well have harmful consequences.

The State is hardening. The proof: the attempt on the part of the Ministry of the Interior to create a file on people who are arbitrarily classified as “suspects”, and the passage of a Law of Civil Security that gives the police carte blanche to repress any movement that protests in the streets. As opposed to those who propose constitutional reforms, or even to “democratize” the State in order to save it, there is a political sector that seeks to armor it with all kinds of repressive measures. Behind the walls of this fortress the majority of the real powers that have a great deal to lose in this crisis have taken refuge. They are beginning to panic, and that is why the State has embarked upon a change of course; with this goal in mind it is preparing the ground. The communications media was the first to lend a hand in this task, long before the police and the judiciary. For quite a while now fantastic stories about mysterious international visitors, the messengers of anarchy, as well as other tales of the same alarmist type, have been circulating, stories that have a tendency to criminalize the only means that exist which are opaque to Power (an opacity that is itself a scandal): squatted buildings, libertarian cultural centers and self-managed collectives.

The message is clear: either us or chaos. The strategists of Power do not believe that the libertarians and squatters are their most fearsome enemies, even though they are quite aware of the example of Can Vies. To the contrary, in their view they comprise a weak enough link to serve as a scapegoat, a kind of warning buoy to those who might also think of navigating such waters. The crude set-up staged by the National High Court judge, Bermúdez, is not just a simple maneuver of intimidation against them and the possible conflicts they might unleash in defense of the Banc Expropiat de Gràcia,1threatened with imminent eviction. You do not need to read between the lines. The arrest of a dozen young people, almost all in Barcelona, at the old Rosa de Foc,2under the pretext of four homemade explosives that were detonated two years ago at two separate ATM machines—acts that were ridiculously defined as “terrorism”—or the deployment of more than four hundred State Police [“Mossos d’Esquadra”: the Catalonian regional police force] against the Kasa de la Muntanya,3 are such disproportionate and incommensurate responses that they cannot dissimulate their sinister intentions. And other, similar events took place not too long ago.

Those who pull the strings of such obvious set-ups are either a handful of useless mental defectives, or they are simply trying to warn others—the legal opposition—that they should desist from their monkeyshines, applaud the Gag Law and join the united front with the System. Or maybe they are both at the same time. The provocation of the anarchists, good people who are not afraid of anything, is the first step in a strategy of tension that is just the tip of the iceberg. Power is trying to stir up some kind of commotion in order to strike fear into the hearts of the television-watching citizenry. The State is floundering, it fears for its stability, it is on the verge of a nervous breakdown and that is why it hopes that a few minor disturbances will forge the unity of the party of order. Judging by the spread of the example of the numerous demonstrations yesterday all over the peninsula and, above all, the enormous demonstration in Barcelona, we doubt that it will succeed. 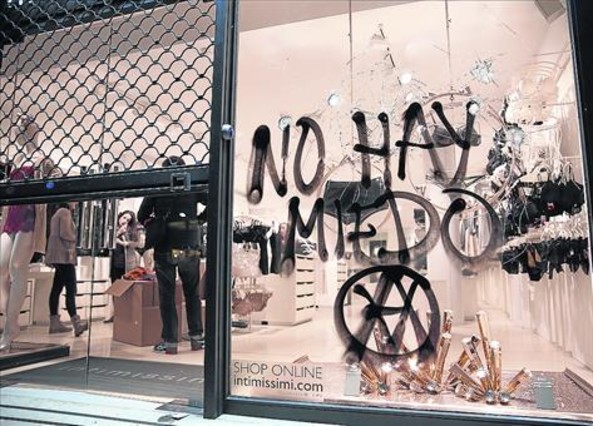 This entry was posted in News blog and tagged anarchism, spain. Bookmark the permalink.