All power to the plenums: Bosnia and Herzegovina’s insurrection

A spectre haunts capitalism, the spectre of a people assembled.  From Tahrir to Puerta del Sol, from Syntagma to Zuccotti Park, from Taksim to the city assemblies of brazil, the social movements of our time resonate with protests whose forms of life are communities gathered without leadership, command or hierarchy; communities made in an ongoing self-creation.  Governed by principles of freedom (all may be introduced for debate) and equality (all may speak), the assemblies of our rebellions are open, horizontal and participatory.  Though born of protest, and often vehicles for the formulation of demands on State authority, they are far more than simple instruments for a counter or dual power, more than the ground of future constituent processes.  Through them, a people emerge, defined not by social position, function or ontology (class, sex/gender, ethnicity, race, etc.), to be accordingly judged revolutionary or reactionary, but by the autonomous self-making of a singularity that fractures and transgresses State and social identities.  With these last suspended, or destroyed, the instrumentalisation of the assembly for State centred politics is rendered secondary, is questioned and challenged, as it becomes the space and time for the shaping of new subjectivities, new ways of being in the world.

“Death to Nationalism!”, scream the graffiti.  “For over 22 years, ethno-capitalist elites have raped and killed, mentally and physically abused women, men and children alike in the carnage that was heralded as ‘transition to democracy’.  Since the end of the war in 1995, instead of mourning the horrific losses, citizens of Bosnia and Herzegovina have been forced, by local and international actors alike, to accept that they can only speak and act if they embrace the status of victims, off the backs and bodies of whom the ethnic elites can steal their riches.” (Damir Arsenijevic)  Political parties have been pushed aside: “behind this [movement] stand only hunger, humiliation, and the deprivation of all of our rights for all of these years.” (Svetlana Nedivomi?, of the Sarajevo Plenum)  “It’s necessary to understand that nobody speaks in the name of everybody or others and that everybody has the right to speak but the Plenum votes for the message that everyone has a duty, out of ethical reasons, to pass on.”  “[T]here is one ‘flag’ of the protests and of Plenums, that of social justice.” (Valentina Pellizzer, of the Sarajevo Plenum)  “A plenum is a protest for the creation of possibilities”, states a Tuzla activist. (See video below)

Demands on state authorities have of course been made, born of bosnia and herzegovina’s subjection to economic and social rape (privatisation, bankruptcy, the destruction of state social services, mass unemployment (over 40%), wage and pension reductions, growing and grotesque inequalities of wealth (85 of the country’s richest oligarchs are collectively worth 9 billion dollars (WealthX), while GDP per capita, between 2009-13 was 4,556 dollars (World Bank)), enforced by ethno-centric, nepotistic and corrupt governments.  On the 5th of February, some six hundred unemployed workers gathered before the government building of the canton of Tuzla, joined by employees of privatised companies recently declared bankrupt.  Two demands are made immediately: the annulation of fraudulent privatisations and the resignation of the politicians responsible.  The protest spreads to other cities (Zenica, Mostar, Sarajevo, Prijedor, Bijeljina) and small towns (Gornji Vakuf-Uskoplje and Srebrenica) and on the 7th of Februray, the government buildings of the cantons of Tuzla and Zenica, as well as the building of the presidency of Sarajevo, are put to the fire.  The cantonal authorities of Tuzla resign and the first of the country’s plenums makes its appearance, open to all and meeting each evening.  And the example spreads, with solidarity protests in Serbia, Croatia and Montenegro. From the Tuzla workers and plenum comes the first declaration of general demands, which will also re-appear in other plenums.

Bosnia and Herzegovina: Workers and citizens’ proclamation after the resignation of the government of Tuzla Canton

Today in Tuzla a new future is created! The government has submitted his resignation, which was the first demand of the demonstrators and thus creates conditions for further solving of the existing problems and the fulfillment of the rest of the workers’ demands.

Accumulated anger and rage are causes of the violent behavior. The attitude of the authorities has led to the fact that the situation in Tuzla escalated. Now, in this new situation, we have to focus this anger and rage on building a productive and useful system of government.

We invite all citizens to support the implementation of these demands:

1. Maintaining public order in cooperation of citizens, police and the civil protection, to avoid any criminalization, politicization and manipulation of any protests.

2. Establishing a technical government, made ??up of professional, non-political party members, uncompromised people, who have not had a single mandate in any level of government, which would lead the Tuzla canton to the election of 2014. This Government shall have the duty to submit weekly plans and reports on the activities and achieve the given objectives. Work of the Government will be monitored by all interested citizens.

3. Resolve, by emergency procedure, the questions of regularity of the privatization of the following companies: “Dita”, “Polihem”, “Poliolhem”, “GUMARA” and “Konjuh”, and:

6. Cancellation of additional payments to the representatives of government, as personal income, on the basis of participation in commissions, committees and other bodies, as well as other unreasonable and unjustified compensations that workers in the public and private sectors don’t have.

7. The abolition of wage to ministers and possibly other government officials, who are getting wage payments after the expiration or termination of their mandate.

This Proclamation is brought by the workers and citizens of Tuzla Canton, for the good of us all.

From a “leftist” or “anti-capitalist” perspective, one might be tempted to criticize the limitations of the demands.  But what is fundamental, first and foremost, is that they arise out the plenum.  And though some may appear to be easy to address (the abolition of “golden parachutes” for ministers and government officials, for example), others are obviously not.  Indeed, they are impossible without putting into question the very social relations that structure the State and Capital; and thus the opening up of possibilities.  The evolution of the demands of the plenums are testimony to the evolving shape of the movement, something which can only continue as long as the plenums remain active and central to it.

Opponents to the movement already make themselves felt: state authorities, nationalist political parties and organizations, local mafia, clientelism, and the like.  (Sarajevo’s government this last week prohibited the use of the state public space that the city’s plenum had been using (click here) and in Mostar, this last weekend, police broke up a demonstration against local state power (click here) ).  In these lines of tension and of flight, the movement remains mobile, capable of re-defining and re-directing itself.

The radicalness of the plenums, or the assemblies of other recent movements, lies in their very nature as gatherings of the free and equal.  The worlds of those who participate in them of course are not worlds of freedom and equality.  Yet it is precisely in this sense that the assembly creates, is, the people.  Those who participate, in participating, affirm no identity or role; they are rather united by that which escapes any function or social location.  These are not the people united by any nationality, sex/gender, class, race, etc. (such are not the people, but a group defined by a particular community belonging, separate and in opposition to others).  They become the people by stripping away any such identities and appearing in that most “universal” of forms: openness to others.

The people … It is there, it is no longer there; it ignores the structures that could stabilize it.  Presence and absence, if not confused, virtually change with each other.  It is in this that it is redoubtable for the holders of power that do not recognize it: not allowing itself to be seized, being both the dissolution of social reality and the indocile obstinacy at reinventing the social in a sovereignty that the law cannot circumscribe, because it refuses everything while maintaining itself as its foundation. (Maurice Blanchot, La communauté inavouable, 56)

The challenge is thus to keep the assemblies alive, to hold the compromising and murderous identities at bay; which is to say that State and any corresponding constituent process.

I call the “State” … the system of constraints which precisely limit the possibility of what is possible. … The State is always the finitude of possibility, … the State organises and maintains, often by force, the distinction between what is possible and what is not. (Alain Badiou, L’hypothese communiste, 191-2)

In effect, in the last instance, the State can acknowledge any demand of identity – even … that of a state identity interior to itself.  But that singularities constitute a community without identity claims, that men and women co-belong without a representable condition of belonging, constitutes what the State can in no way tolerate. (Giorgio Agamben, La communauté qui vient, 88-9) 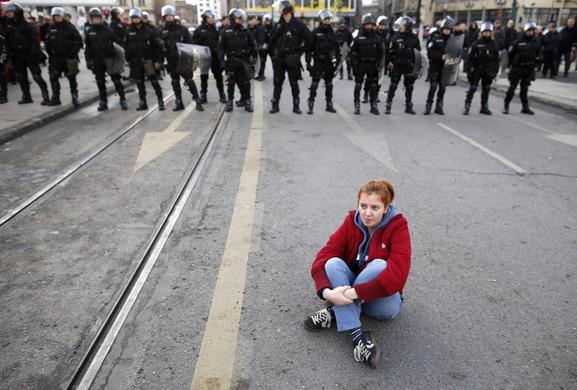 A movement of assemblies “challenges” social relations of domination, “contests” sovereignty.  Beyond demands, it is a politics without a decision on the exception (Carl Schmitt), without any foundation or justification beyond itself.  It calls not for the recognition and the assuming of duties; it rather invites and seduces to a form of life.  And therefore we may speak of such a movement as a destituent politics, a politics of pure potentiality, that is, pure freedom.

In writing of the occupation of Tahrir Square in early 2011, Badiou described the occupation as a commune, both in reference to the Paris Commune of 1871 and to the meaning of communism, “the creation in common of a collective destiny”. (Alain Badiou, Le Monde 18/02/2011)  It is in this sense that one may speak, in our times, of both the spectre of communism and the spectre of a people in assembly.

n.b.  If there is a weakness in the plenums of the bosnian movement, what others would consider a strength, is the adoption of the principle of decision making by simple majority, instead of consensus.  The former threatens to introduce into the assemblies a principle of sovereign command, something that is radically inconsistent with the openness of the assemblies.

Two videos follow: first a documentary of the Bosnian movement by Brandon Jourdan of Global Uprisings and a second from local bosnian television.  As regards the latter, if you set aside the conspiratorial cynicism of the television journalist, which those interviewed effectively do, then it is very good.

For a good English language on the movement in bosnia and herzegovina, see: Bosnia and Herzegovina Protest Files.

This entry was posted in Commentary, News blog and tagged bosnia and herzegovina, Communism, insurrection, rebellion. Bookmark the permalink.