Numerous calls have been made in france not to celebrate May 68, but to have it burn again in 2018.  These calls have in turn been circulated beyond france.

From lespaves.net, an invitation for a beautiful May in Paris …

Certain journalists, intellectuals, artists and politicians wish to commemorate the year 1968 and its revolts, which they present as driven only by a desire for capitalist democracy and individual liberal pleasure. Once more, it’s about sales, audience ratings, literary rags and voting ballots; it’s about neutralising and distancing what was political in one of the most subversive, violent and offensive years of the post-war era. Analysing history to drum in its end, conjuring the enthusiasm and the revolt of one generation to better confine and pacify the next…

Parisian students kicked off the month of May by occupying the Sorbonne, particular demands exploded, their rejection of the world was written all over city walls and embodied in nocturnal barricades. Workers soon joined the dance and started a general and uncontrolled strike that paralysed the country. Within two weeks, the government folded and granted the strikers historic social concessions, which they turned down.

In Mexico City, hundreds of thousands of protesters gathered, universities and schools were occupied and clashes occurred in the streets, in a movement for the freedom of association and against political repression. The Mexican State put an end to the movement by murdering over two hundred people in the Tlatelolco massacre.

On the other side of the Iron Curtain, a new government launched the process of political liberalisation, with the support of the people who pushed to hasten its implementation: freedom of speech and of assembly, an end to censorship, the opening of borders to the West, a restriction of the national security forces’ powers. It took tanks invading the squares to end the Prague Spring.

The Viet Cong launched the Tet offensive against major cities in the South. The assailants were pushed back after a few weeks, but this offensive showed the world the Vietnamese people’s army’s potential and heralded the Americans’ defeat.

In Italy, the student movement was in its second year. Born out of a criticism of the authoritarianism and the capitalist function of the university system, the movement went beyond this frame, got involved with international politics and domestic issues, staged back to back strikes, left campuses and spread to the cities, and experienced its first victorious clashes with the cops. The year 1968 was the beginning of the long red period in Italy, twelve years of political experimentation and conflict, of occupations, strikes, riots, armed struggle, of pirate stations, expropriations, social unrest. All aspects of life were turned upside down…

Elsewhere too, in Japan, in the United States, in Germany, in Senegal, a movement for emancipation without precedent raged across the planet: sexual and political liberation, struggles against all forms of authority, feminist movements and political dissidence; a rejection of work, of the economic world and its diktats ; lives in community and illegalism; the birth of radical ecology and a rejection of the academic system, re-appropriation of knowledge; rebellion against imperialism, the military institution and colonial wars.

The men and women who took on these struggles paid a high price for it: tens of thousands were injured, killed, imprisoned or exiled. But they also experienced victories and new-found powers, experimented new forms of life and of struggle; cracking the world open to let other unknown and wild ones emerge… Everywhere, the alliances between workers and students, men and women, immigrants and national citizens forged the breadth and the intensity of these movements, otherness as a common power, a way of throwing off the adversary, of reinventing oneself, of learning to fight, and to win.

They remember, we resume

Despite all of these revolutionary attempts, the capitalist regime has continued to forge ahead, through mutations and appropriations, growth peaks and global crises, the world is sicker than ever:

European citizens are supposedly at the height of freedom, their lives brimmed with thrilling choices. The choice to like or not to like, between this shit merchandise or the next, between this party or the other, which will both lead the same policies anyway, and of course, the choice of the type of cancer to die of… An abundance of meaningless trajectories to make us forget their lack of destiny, that’s what capitalism has to offer the “privileged” of our time. As for the rest, the millions of migrants that are fleeing war, poverty or climate disasters are doomed to wander and to die at the gates of Europe, or, when they make it through, to become exploited labour force for employers, as well as canon fodder on which Western police forces test their repressive techniques.

In terms of equality, some white educated women can now become managers just like any other, sometimes even executives for major global powers. But the number of rapes and of femicides still hasn’t decreased, and women of colour continue to be the shameful cement to our society: they clean, care, assemble, educate and remain invisible.

Work is now more than ever imposed as our society’s cardinal value. The unemployed are tracked down, scorned and eradicated. Uber, Amazon and their armies of “creative” managers have set about to reinvent Fordism and an existence in which each second is counted and monitored: the cult of the Now, a perpetual present that leaves no room for the past nor for the future.

At a global scale, we’ve lost count of the number of species that have have gone extinct or are endangered, as well as the number of ecosystems that have been destroyed or the extent of the ocean’s pollution. The economic world continues to impose domination of the planet and the destruction of all forms of life.

Luckily, a form of awareness, attempts at subversion and at confrontation have emerged out of this wonderful world. Desertion is on the rise everywhere, green capitalism and professional politicians only fool idiots and bastards. Alliances are forged, migrants are occupying squares and buildings, making their existences and experiences visible, women are organising themselves so as to assert their rights, their voices and their lives. At a greater scale, political reforms and police murders have lead to massive and unexpected political eruptions, major infrastructure projects have given birth to free communes and to real transformations of entire territories, some gatherings of world leaders have ended in thousands of police officers being thwarted and hyper-secure cities being vandalised.

As a part of these attempts, French comrades have emitted a call to go to Paris for an unbridled month of May. With this text, we would like to answer their call and relay it to all our accomplices and friends, present and future.

We are going to Paris because we think that words and history deserve to be fought for as much as the state of the world. It isn’t about fetishising or idealising a thing of the past, it’s about nurturing a memory, a history, lives and struggles, as well as the desires and designs that flowed through them, to make them live on. Fifty years ago, thousands of companions set out to storm the heavens. That they failed to bring down capitalism in the end isn’t important. What matters to us is the questioning, the acts and impulses they put forward and how we can echo them, how we can breath them, question them, and perhaps reiterate them. As our Zapatist friends say, the future is in our past.

We are also going to Paris for what is at stake there at the moment, to support our French comrades and present our best wishes to Macron. After having been elected through a rejection of the traditional political class and presented himself as “apolitical”, Macron has been implementing neoliberal policies at a frantic pace: destroying workers’ rights, embracing authoritarianism, increasing state control. His first mistake could be his current pursuit of a frontal reform of the baccalaureate, of access to universities and of the French national rail, while having made it clear that he intends to destroy the French public sector. Railway workers, which are known for being the most assertive workers, have initiated a strike that will severely affect transport from the beginning of April. Many students have started to block their schools and universities. Civil servants have understood that the infernal rates and aggressive management they are subjected to is only going to get worse. Of course, the government is coupling its political attacks with media attacks against railway workers and civil servants, while occupied schools and universities are faced with ferocious police and administrative repression.

But the strikes and demonstrations that took place on 22 March 2018 showed assertiveness and determination that hadn’t been seen since the movement against the reform of employment law in 2016: 180 demonstrations all over France, seriously impaired air and rail systems, massive and offensive cortèges de tête. No-one can tell how these early days of a movement will evolve over the next few weeks, but there will be a definite stake in creating bridges, multiplying encounters and worlds to share: invading train stations during protests, opening assemblies, occupying places, finding common targets… Trying to feel and to fight together, so that the coming spring may go beyond history and at last, set free a season we can be taken with.

Nothing is over, it’s all beginning. 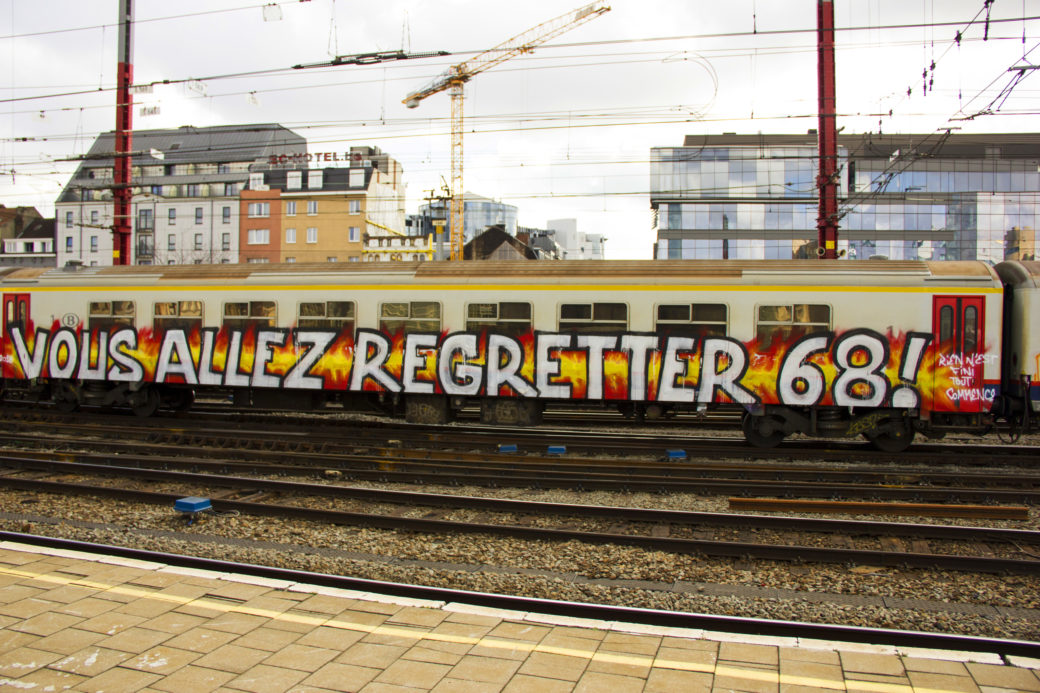 This entry was posted in Commentary, News blog and tagged anti-capitalism, france, May 68, May Day. Bookmark the permalink.