Another day under democracy: Hamburg, June 6 – Protesting the G20 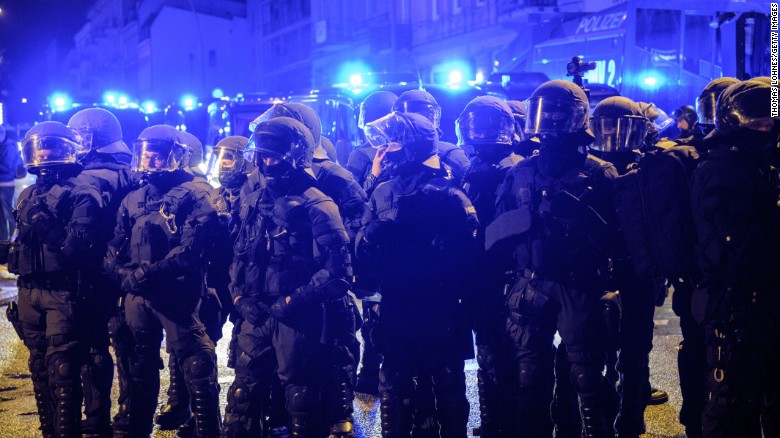 The Crimethinc collective is posting continuous live updates of the “Welcome to Hell” protests in Hamburg against the G20 gathering. We share below two such posts, in solidarity we all of those resisting in the city …

The Police Lost Tonight in Hamburg

Summing up the First Day of Resistance to the G20

While the city of Hamburg is slowly quieting down, there are still many streets on which demonstrators continue to keep the police at bay, pelting them with projectiles and building barricades. It is fair to say that the police will be busy all night. As we’re wrapping up our live coverage of the first day of actions against the G20 in Hamburg, it’s safe to say that the police lost tonight.

The residents of Hamburg woke up this morning to the news that a large number of Porsches had been burned in the outskirts last night, giving an indication of the ungovernable energy with which Hamburg would resist this intrusion.

Despite the police controlling busses and trains full of activists at the border, they simply could not stop the crowds that gathered in the city center for the Welcome to Hell demonstration. The crowds they had to fear were not a few radical activists listed in the files of the secret police, but the population of Hamburg itself, which came together in opposition to the militarized policing that the G20 forced on the city.

The German police had brought together approximately 20,000 officers, including troops from other EU countries, with the intention of utterly quashing resistance. They brutally raided the camp that activists set up to accommodate protesters, then attacked people who gathered to enjoy themselves in the streets on July 4 and 5. They did everything they could to spread fear, in hopes of intimidating people out of showing up to the demonstrations to express their feelings about capitalism and the state.

It didn’t work. The Welcome to Hell demonstration attracted multigenerational crowds prepared to participate in blocs, black and otherwise. Thousands of people came together with joy, courage, and determination. In response, the police attacked a permitted demonstration without any justification—creating panic, severely injuring many people, and making more than 50 arrests in the first wave of repressive violence.

Yet this only served to foment more outrage against the authorities, which spread all around the city in the form of burning cars, barricades, and multiple simultaneous clashes and demonstrations of thousands. The strategy of terrorizing and kettling people with tremendous numbers of officers using brand-new militarized police equipment and brutal force simply failed. There were too many people on the streets and the police lost control. They report that 76 officers were injured in Hamburg tonight.

There was a lot at stake today. The German state and the world leaders wanted to show that they are in control, that their reign is popular—or, failing that, that they can successfully dominate the population. They wanted the world to see that they can freely harass, intimidate, and oppress people without consequences. They wanted to flaunt their power by bringing the G20 to a center of resistance. Instead, they demonstrated their weakness.

Tonight, with the help of courageous people from around the world, Hamburg stood up and said Enough. We are humbled and inspired. We will continue tomorrow.

The G20 Summit and the Question of Violence

How the Authorities Delegitimize Popular Resistance

Whenever clashes take place like the ones unfolding during the G20 summit in Hamburg, people who are accustomed to accepting state violence as a routine fact of life express dismay at seeing people defend themselves. That’s right—police armed with lethal weapons exert systematic brute force against unarmed civilians and the civilians are blamed for trying to stop them. What’s going on here?

The discourse of violence is not neutral. The state and the corporate media put tremendous effort into controlling how violence is defined in the collective imagination. In their discourse, shooting rubber bullets, concussion grenades, and tear gas canisters at unarmed civilians is not violence, but throwing tear gas canisters back to lines of police equipped with gas masks is. Looking at this example, we can see that what is really at issue is not the use of coercive force. Rather, the term “violence” is used to describe anyone who challenges the monopoly on coercive force that representatives of the state usually enjoy.

When those who hold power describe people as violent, the goal is almost always to legitimize the use of violent force against them. We can clearly see this in the press campaigns that police have carried out in advance of the G20, making an effort to define certain protesters in advance as the “violent” ones. Whoever accuses others of being violent is likely about to inflict violence upon them.

When politicians and activists pressure us to promise that we will not be “violent,” they are threatening to take away the legitimacy that can discourage the state from carrying out violence against us. In this regard, “nonviolent” NGOs and “peace” activists are complicit in the violence that the state is able to inflict on those who it delegitimizes as violent protesters.

If we always allow those in positions of authority to define what is and is not acceptable behavior, we will never be able to protest in a way that can exert any leverage on them or, consequently, on the attention of the general public. Rather than accepting the discourse and asking whether a certain kind of behavior is violent, we should ask a different question: how does it distribute power? What kind of power relations does it create? What power relations does it interrupt? Not just anarchists but all lovers of freedom, regardless of political affiliation, should understand that this is the more important question.

This is why practically everyone acknowledges that it is acceptable to intervene with coercive force to save the lives of people threatened by a sniper like Anders Breivik: it is not a question of what is legal or illegal, or whether or not to be violent, but of how to protect the freedom and well-being of those who will otherwise be killed. As increasing state repression, economic chaos, and catastrophic climate change threaten the freedom and well-being of more and more people, we can understand those deemed “violent” by the defenders of the G20 to be intervening in hopes of protecting all of us from a greater threat.

Here is an array of resources explaining why we believe people have the right to stand up for themselves, even in ways that the state delegitimizes as violent. Some of the texts also explore why some demonstrators choose to engage in targeted property destruction as a means of exerting pressure on those who hold power.

See also the regular posts from Enough is enough!

Hundreds of demonstrators staged a protest in Hamburg’s city centre ahead of the G20 summit on Wednesday, July 5th. The protest was organised by the artistic group ‘1000 GESTALTEN’ in order to show “a symbol for our society and a symbol that they feel excluded from the political process only look out for themselves, only consume and don’t stand for each other.”

This entry was posted in Commentary, News blog and tagged insurrection, State and terror. Bookmark the permalink.

1 Response to Another day under democracy: Hamburg, June 6 – Protesting the G20