Scenes from the class struggle in spain: For an okupied social centre 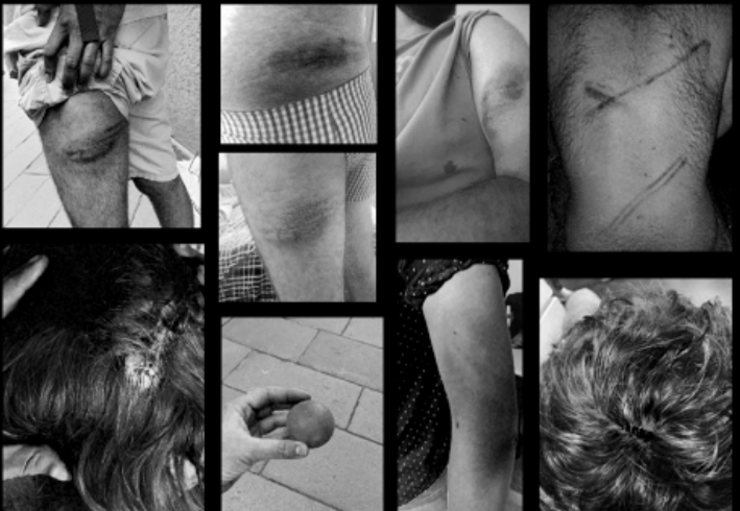 The class struggle cuts not just through the spaces of salaried labour; it divides agencies across all of the different spheres of social reproduction.  Without the latter, the former would cease to exists.

We have tried over the years to chronicle the class struggles of everyday life, with a particular concern with okupations, whether of social centres, housing, industrial spaces, land, and so on.  No struggle here has primacy over any other, and the front lines are often to be found in the most intimate of places, including in oneself.

We share below a brief account of a struggle, one more, around an occupied social centre and the State’s violent response to the creation of spaces of autonomy.

On the 2nd of April of 2014, the locale of a historical cultural association (Agrupación Folclórica Cantigas e Agarimos) in Santiago de Campostela, spain, was taken, giving birth to the CSO Escárnio e Maldizer.

The intention of the new okupation, as stated at the time by the collective behind the action, was first to respond to the evictions of two social centres, the CSO Palavea and the CSO Sala Iago, in Coruña and Compostela respectively.  And then to foment the cultural life of the city, creating a free, self-managed space, in a historical building until then abandoned by its owners.  The activities multiplied: talks, workshops, courses, concerts, a free shop, library, eatery, and so on. (a las barricadas 07/04/2014)  The CSO Escárnio e Maldizer became a point of passage for the city’s and the region’s anti-capitalist political activity and a “school” for forms of autonomous self-management.

On the 30th of May, of this year, national security police closed the the centre, to be followed by its bricking up.  It was no longer to be used by anyone, until properly ripened for real-estate speculators.

The protests and solidarity that followed testify to the centre’s three years of intense activity.

On the day of the eviction, police violently intervened against a protest march …

On the the 10th of June, another, thousand strong march and symbolic okupation, ended again with police violence …

In solidarity with CSO Escárnio e Maldizer, we publish in translation the collectives’ original manifesto …

The affects that move us, the precariousness that runs through us, the struggle which tempers us, the fear that petrifies us, the theft of the spaces that we inhabit, the bodies that we inhabit, with this we sustain our trench, where we confront ourselves and free ourselves from the skin of the world.

Autonomous and anti-authoritarian space for a rebellious and combative Compostela.

From the year 2011, the old locale of the dance and traditional song group Cantigas e Agarimos, at the Algália de Riba, remanined closed.  A group of people from the city re-openned the space to fill it with life and convert it into a social centre of the people, in a historical part of Compostela, abandoned to the logic of productivity, divorced from neighbours and thought of only for the tourist.

The state of the building before its occupation was one of total abandonment by its owners, a construction company, which completely ignored its continuous and relentless deterioration.  For this reason, from the the first moment of occupation, cleaning and restoration work was undertaken to recuperate a space that in a short time became an important focus of cultural life in the neighbourhood, which speculation and disinterest for historical and cultural patrimony condemned to abandonment.

The space was occupied, putting into question private property and the ruinous and miserable management by Capital, creating room for people with some initiative outside of the mediation of money and/or personal profit, developing relations of solidarity and complicity.  In the social centre, all manner of activities are carried out with the aim of sharing, creating and growing together, breaking with normality and the fear of not knowing what to do when no one governs us.  We slowly die in this absurdity called democracy.  For money we accept, for fear we forget, with resignation we support this macabre system.

As it could not be otherwise, we reject all institutional grants and mediation, we oppose the predatory interests of any entity, state or private, we reject our assimilation in defense of our language and culture, giving life to the values of autonomy and horizontality that we seek to disseminate and creating a space of security and respect where care, mutual aid and solidarity are fundamental.  The group that manages the functioning of the space does not limit itself only to this activity; it is our intention to promote initiatives with resonances in the street and to position ourselves in those political processes that we see as fitting.  Furthermore, all manner of collectives that seek through self-management to resist and create alternatives to the attacks of capitalism and patriarchy gather here.

May the offended dignity annul despair and become action. Let freedom cease to be the right to obey and become again the challenge to every form of power. Let the desire to live no longer conform to what already exists and go on the attack to take what has never been.

1 Response to Scenes from the class struggle in spain: For an okupied social centre