Fidel Castro and the fetishism of power 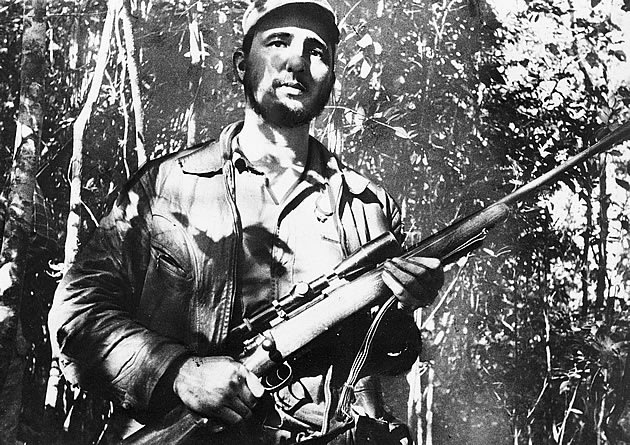 Talking to us of homeland and freedom is a waste of time unless they start by guaranteeing our independence as individuals; we are not about to redeem the homeland while we are all left slaves.

The day following Fidel Castro’s death on the 25th of November, graffiti appeared in Lisbon reading, “Obrigado Fidel/Thank you Fidel”, accompanied by a hammer and sickle.  Ignoring the intentions of the author, and leaving aside delusional nostalgia for “revolutionary pasts”, there is a perhaps strange and modest echo of moral-political truth in these words, for the Portuguese and for others.

In the 1960s, Castro’s government would involve itself in Africa’s decolonisation, directly supporting national liberation movements in various countries.  If the Front for National Liberation (FLN) of Algeria was the first beneficiary of military aid in 1961, Cuban aid to the African Party of Independence of Guinea-Bissau and Cape-Vert, under the leadership of Amilcar Cabral, would so undermine Portuguese control of the colony, that that country’s military (faced also with other major colonial conflicts in Angola and Moçambique) would be pushed to overthrow the fascist regime in Portugal through a coup d’état, that would in turn trigger the “Carnation Revolution” of 1974-75.  If the chain of events could be so simplified, then there is reason to thank Castro, in Portugal at least, if not elsewhere.

Nelson Mandela, in a more celebrated gesture of gratitude, would visit Cuba in 1991, soon after his release from prison and before becoming the first president of post-Apartheid South Africa, to thank the Cuban government and the country’s people for their contribution to Africa’s struggles for independence and helping to bring Apartheid to an end.

In the wake of Angola’s national independence in 1975, the country would be marked by a first civil conflict pitting three different national liberation movements against each other.  Aligned with the Popular Movement for the Liberation of Angola (MPLA), the Cuban military, with additional Soviet support, would repel invasions from Mobutu’s Zaire in the north and South Africa in the South.  (Between October 1975 and April 1976, more than 30,000 Cubans would fight in Angola).  A second act in Angola’s post-colonial civil conflict in the mid-1980s would see the South African army intervene in support of the National Union for the Total Independence of Angola (UNITA).  Again, direct Cuban involvement in the conflict, and most famously, in the Battle of Cuito Cuanavale of 1987 (between 20 to 40,000 Cubans, along with 30,000 Angolans and 3,000 Namibians, would be engaged militarily), would subsequently lead to both Cuban and South African withdrawal from Angola, but also mark the beginning of the end of Apartheid.  Or so Mandela dramatically reiterated, speaking at the July 26th celebrations of the Cuban Revolution in 1991. (Le Monde 28/11/2016)

“The Cuban people hold a special place in the hearts of the people of Africa. The Cuban internationalists have made a contribution to African independence, freedom and justice unparalleled for its principled and selfless character. We in Africa are used to being victims of countries wanting to carve up our territory or subvert our sovereignty. It is unparalleled in African history to have another people rise to the defense of one of us. The defeat of the apartheid army was an inspiration to the struggling people in South Africa! Without the defeat of Cuito Cuanavale our organizations would not have been unbanned! The defeat of the racist army at Cuito Cuanavale has made it possible for me to be here today! Cuito Cuanavale was a milestone in the history of the struggle for southern African liberation!”

And again, in 1994, Mandela would state: “If today all South Africans enjoy the rights of democracy; if they are able at last to address the grinding poverty of a system that denied them even the most basic amenities of life, it is also because of Cuba’s selfless support for the struggle to free all of South Africa’s people and the countries of our region from the inhumane and destructive system of apartheid. For that, we thank the Cuban people from the bottom of our heart.” (counterpunch)

But it is not to thank Fidel Castro that we write (does he in fact deserve to be thanked?), for Fidel Castro and his political-revolutionary ideal, Castrismo, died long before him.  And it died because it would be devoured from within, imprisoned within the chains of militarised national liberation and anti-imperialism, and thereby condemned to perpetuate authoritarian forms of State-Capital.

The Cuban Revolution, which triumphs on January 8th, 1959, with Castro’s march into Havana, was from its origins, a socialist military revolution focused on the conquest of State power; something that would forever inform his vision of revolution.  Once in power, Castro would often govern manu militari (e.g., highly centralised and personalised authority; formal and informal methods of mass surveillance; arrest, exile, execution of opponents; persecution of religious, sexual “minorities”, large scale “voluntary” labour mobilisations; censorship, and so on); he would militarily support and promote – often conspiratorially – revolutions in “Third World” South America, Africa and Asia; and his revolution would engender a theory-practice that is only comparable in political impact to that of the Russian Revolution of 1917.

If Fidel Castro is so easily described as a tyrant by the world’s media, in refrain, on this the occasion of his death (are the many vocal democrats of the moment so different from the dictator they now smear?), and if the Cuban Revolution is reduced to one more example of the last century’s supposed poisonous encounter with utopias turned nightmares, then an exercise in historical amnesia, intentional or not, is at work; because if Castro was nothing but a tyrant, then the political history of the Left after the revolution, in Cuba, Latin America and elsewhere, would be incomprehensible.

As a part of Europe’s working class movements would politically gravitate around the Soviet Union in the first half of the 20th century, much of Latin America’s Left constructed itself around Havana, after 1959.

Francisco Parès, Le Monde correspondent in Cuba in 1959, described the Cuban Revolution in terms of fascination: “Twelve men … organise a revolutionary army, take first the mountains of the Sierra Madre, next the countryside of the Oriente and of Camagüey and – exactly two years after the beginning of their adventure – inflict a decisive defeat on the professional army of general Batista. … Fidel Castro’s victory is total, brilliant. … How can this unique revolution in the history of Latin America be explained?” (Le Monde 7/11/2016)  And the fascination was contagious, politically, intellectually and culturally, spreading across the continent and beyond.

Henri Alleg, journalist, French Communist Party member, tortured by the French military in Algeria, described the revolution in terms that would become the overwhelming discourse of the “friends of Cuba”: “The exploitation of man by man liquidated, land re-distributed, unemployment almost eliminated, shantytowns destroyed and new houses built, illiteracy conquered, all of this in three years.” (Le Monde 27/11/2016)  And Simone de Beauvoir, seduced, as so many other intellectuals and artists were, could write dramatically, “Fidel Castro overturned the notions of the possible and the impossible.  It is a kind of miracle.  Because it was necessary to dare to believe in the chances of man.” (Le Monde 27/11/2016)  Seemingly absurd today, such statements capture the event of the revolution, a revolution theorised and synthesised by Che Guevara in La guerra de guerrillas, 1960, in a few principles that would become a new catechism for radical politics: “1) The popular forces can win a war against the regular army; 2) one should not always wait for all of the conditions to be met before carrying out the revolution; 3) in underdeveloped America, the fundamental terrain for the armed struggle must be the countryside.” (Le Monde 27/11/2016)

The resonances of this revolution in Latin America would be intense (the Organisation of Solidarity with the People of Asia, Africa and Latin America, born out of the Tricontinental Conference in Havana, in 1966, was supposed to extend the Cuban experience globally) in nationalist and leftist political parties, and in the inspiration and support for armed struggle among the Left: Venezuela (1962), Guatemala (1962), Columbia, Peru (1965), Bolivia (1967).  The bloody defeat of these rural insurrections (with Colombia’s coming to a foreseeable end this year), would be succeeded by urban guerrilla movements in Uruguay, Argentina, Brasil, Mexico, in the 1970s.  The spread of revolutionary movements on the continent was indeed on such a scale that, in response, by the end of the 1970s, most Latin American countries were governed by military dictatorships which had came to power through coups d’états, supported by the United States, with the purported aim of stopping “communism”.

Only in Nicaragua, in 1978-9, would the Sandinista National Liberation Front (FSLN)  successfully emulate the Cuban example, in the overthrow of the dictator Anastasio Somoza DeBayle; a short lived success, as the revolutionary regime would be subject to and exhausted by a U.S. funded proxy war.

For Castrismo, success was measured simply by the conquest of State power and whatever socialism or communism followed was made subservient to the end of national sovereignty.

Yet what “communism” was this?  The social reforms inaugurated by the Cuban Revolution are not to be dismissed, especially when compared with the average conditions of life in most other South American nations, including Cuba before the Revolution.  That does not however make of Castro “a towering champion of the oppressed” (Jacobin 27/11/2016) The social reforms were always State centred and State driven (and often forcefully imposed, foolishly conceived and poorly managed), leaving little room for alternative visions about what might be at stake in these domains.  The financing of these reforms was also dependent on a militarised economy that measured well-being exclusively in terms of growth, that is to say, the intense exploitation of resources, largely agricultural and, once the reliance on the Soviet Union was politically assumed, for export.  The collapse of the latter brought the model to its knees.  And without the Soviet Union, yet still stubbornly insistent on following the same political-economic model, with China or Vietnam today as the examples to follow, the Cuban State today is fated to open itself up economically to a global-financial capitalism, with all of the consequences that this will bring.

What was lost in all of this was a revolution that in its beginnings was a heterogeneous collection of forces and political movements, forces and movements that preceded Castro’s guerrilla and that were present in the cities and work places, as well as in the countryside; a revolution that remained alive only to the extent that the autonomy of its many actors remained (of those of the “opposition” who were arrested, exiled or killed in the early years after the revolution, many were also opposed to the Batista dictatorship and U.S. domination of the country, including anarchists), actors who were effectively marginalised or swept away by Castro’s movement’s control of the State.

Nothing remains of the Cuban Revolution today except a memory, the memory of a man who had become a shadow of his former self.  But even then, it was/is a false memory, for Cuba’s revolution was far more than Fidel Castro, and the extent to which it became his revolution was the extent to which it died.  Castro could not imagine revolutionary power outside national and State sovereignty, and he could not imagine that sovereignty embodied in anyone other than himself.  His was the most fetishistic of revolutions, for the revolution in the end was Fidel Castro, his charisma, his will, that reigned for almost fifty years and that could then only die with his passing.

Yet if the Cuban Revolution is dead, there is something that remains of Castrismo that continues to haunt so much of the Left, namely, the belief that liberation and freedom come with State control, when both are possible only beyond the State and its power. Radical revolution, if the concept continues to preserve any sense at all that would render it worthwhile, must be carried out against power.