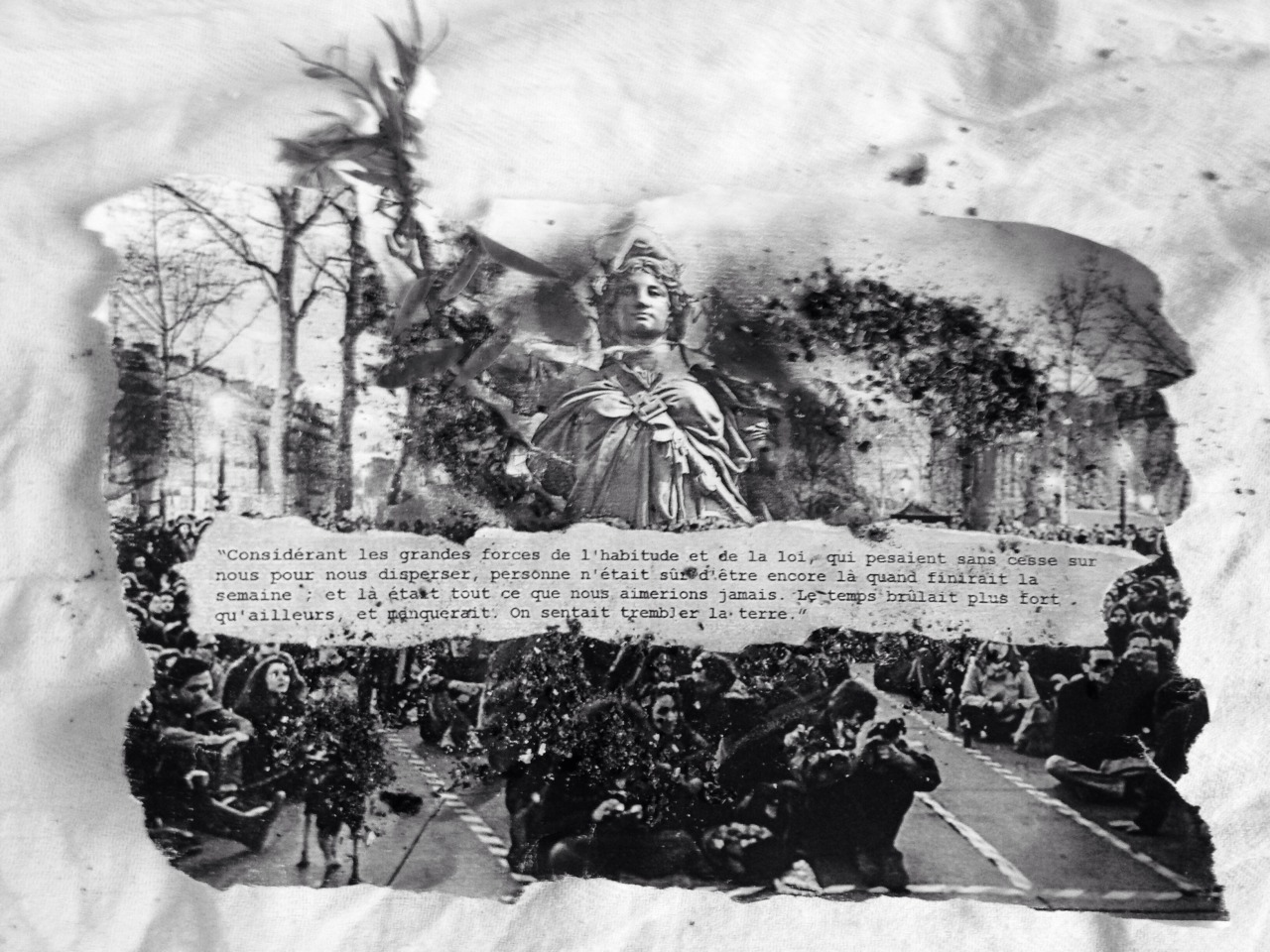 Nuit Debout in Paris and elsewhere in france continues to occupy public squares, after now two months.  The “movement’s” resilience testifies to agencies and virtues that are quickly passed over or ignored by far too many.  This is of course not to say that Nuit Debout is above criticism.  But to criticise the movement from afar, from the distance of intellectual or ideological purity, or simple slavishness to the status quo, does not take one far.  And what we continue to share, stubbornly, are reflections from within that exemplify the openness and plurality of Nuit Debout.  No one has all of the answers and however much the movement is pulled at and tugged on (by, for example, state authorities, labour unions, political parties, professional revolutionaries), it has remained strikingly cohesive, but cohesive in its plasticity to ever changing expressions and forms.

If the spark for the movement was the proposed labour reform of the current socialist government, now made law, Nuit Debout has since its emergence placed itself in opposition not only to the reform, but to the world that gave rise to it.

What follows is a reflection, in translation, on Nuit Debout published on May 27, in Paris-Luttes …

The said movement against the new labour law and its world has allowed for numerous encounters, which have materialised through the creation of new bands of friends and new groups. School exams and summer vacations are just around the corner; it seemed important to us to think now about what follows, because unfortunately there is the risk that the demonstrations, the strikes, the occupations and the blockades will not last indefinitely.  So that the slogan “let us continue standing/awake [debout]” not remain at an embryonic stage and so that none among us return to the life that we used to lead before, we have set out a list of ideas, to some, that we leave to each one to freely develop according to the local context of struggle.

// To organise ourselves in permanent committees with the objective of addressing problems in each school or place of work, while trying to seize relevant space to be able to discuss politics, to then make of it a place where politics is not reduced to voting, but to organising oneself practically and to which theory is linked.  These committees could act with regard to the internal problems of each school or place of work, to participate in the mobilisations that occur over in the course of the year, as well as participate in the struggles that are carried out in the neighbourhoods where they are to be found.  It is vital to break out of the schools, of the campuses and the places of work.  It is in effect by creating links with struggles here and there that we will be able to increase our common power, in making denser the network of our relations and by learning through the exchange of know-how, as much practical as theoretical.

//To think in terms of place, for without that, everything is considerably more complex, whether it be to re-encounter, to discuss or to share a meal, because politics is not reducible to general assemblies or actions, but also includes to the way to grasp everyday life collectively.  Spatiality as something that we produce as well as something that at the same time produces us, must be taken into account.  According to the situations and the objectives, these spaces can be different.  A secondary school committee could try by diverse means to obtain a room to hold meetings, to prepare food sold at free prices, to organise art ateliers (subversive “détournement”: posters, videos, stickers and the like), prepare actions, make banners and other objects necessary for demonstrations, or set up dissident classes on certain subjects by inviting sympathising teachers, or again reading clubs to be able to confront one’s personal feelings with others.  A group of friends without the means or the desire to pay a rent could open a squat in an abandoned house to live and to create, if the desire is there, political activities, even if the fact of living there is already in a sense political.  To rent a space can also be a good alternative to have at hand a material base permitting the opening of squats or for a group to open itself up to a neighbourhood.

// To gather together so as to no longer isolate oneself, that is, to organise collectively (identifiably or not), with friends or with persons who share common interests, so as to develop diverse projects, such as the publication of a newspaper that could cover current events critically; a group could marshal the recuperation of food to prepare popular kitchens, set up concerts or cheap party nights (yes, to party is expensive), recuperate things to help the homeless and the undocumented, and many other possibilities to be considered differently so as to rethink our relationship with the environment that makes up this world.

// To no longer think of demonstrations as simple wanderings, that they are not reducible to healthy constitutional walks, but instead seek to determine logical targets that respond to objectives, immediate as well as long term, that we give to ourselves.  A strike has as an objective to block the economy, a ZAD to occupy a territory to protect it and to live there.  To no longer close oneself in THE demonstration and recuperate the festive in this last, proposing mobile banquets (or immobile, or both), subversive carnivals for the young and not so young, and to leave space for our imagination to shape right now the world of tomorrow, without trapping oneself in the idea of the great uprising.  Emancipation is never attained and the struggle must always renew itself, think itself.  If the struggle is sometimes made up of events, of great feats, sudden advances, it is also an integral part of our daily life, found in the gestures that construct it.  To lose sight of this would be to condemn the struggle to a slow, but certain death.  It is equally important to accept the diversity of forms of struggle, to not reject any a priori.  These questions are to be approached from a strategic point of view, and not a moral one.

// To reflect on what it means to organise oneself in terms of domination, because we are not all equal in the way that we express ourselves.  Some are at ease, others are less so.  It is necessary to take into consideration the problems of sexism, because capitalist society is a patriarchal society and we are conceived in such a way as to integrate the dominant norm that is masculine.  To never forget that the problems of racism are equally important; after, without entering into a large debate, there are different approaches to resolving it.  The best however is to always allow those persons most concerned express themselves to be able to understand the problem.

We do not know if we will win this battle, but in fact, it is but one among others to come.  What is important is to reflect on how to create spaces where one has an impact on the real, in the short or long term; to act to develop bases that are of consequence and to hold ground in moments where we would not have been able to do so before.

“To think, to attack, to construct – this is fabulous line”, from the last book of the comité invisible.

On one of the banners was written, “The world belongs to us”.  But it is for us to inhabit this world and to trace in it not the line, but fabulous lines, that will take us to new histories, to new commons.

This entry was posted in Commentary and tagged france, Nuit Debout. Bookmark the permalink.