In June of 2014, we posted news about a series of okupations of banks in Catalonia, with the aim of creating social centres.  One such okupation was baptised the Banc Expropiat of the Gràcia neighbourhood in Barcelona.

The manifesto of the Banc Expropiat stated …

The defense of the Expropriated Bank is defense of a common, collective, community good, permits the struggle against the ravages of capitalism. The Expropriated Bank is therefore not only a physical space, but a nevralgic centre of resistance to the city, a place to give and to receive the mutual aid and solidarity that we need to confront the attacks of capitalism and that construct alternatives possibilities to current state and capitalist society.

The defence of the Expropriated Bank is the defence of a collective space where isolation and loneliness imposed on us by capitalism and the state is broken, it is the meeting place for those who do not want to step on others to live with more money, for those who do not want to speculate or to take advantage of the miseries of others. The day to day of the Expropriated Bank, with relationships that occur, outline another way of living, more dignified, more courageous. It is where new hope is built, the hope of a diametrically opposed to the world we live in, a better world.

Every day that passes with the Expropriated Bank for the city is a better day.

What is needed are thousands of expropriated banks, in every neighborhood, in every city.

In the months that followed, the Banc Expropiat became an autonomous, self-managed social centre, serving as a point of confluence for political, social and cultural activity in the immediate neighbourhood and beyond.  It was a space, which with other okupied spaces in the city, both challenge the reproduction of the social relations constitutive of State-Capital and permit the creation of alternative social ties.

On Monday, May 23rd, the police, in full riot gear, evicted the Banc Expropiat social centre and re-claimed the authority of private property.  But what perhaps was unexpected by the authorities was the response.  It took eight hours to secure the eviction against resistance.  Each day following, efforts to take back the bank ended in battles with the police.  Peaceful protests followed on the following Thursday and Friday, with a respite until last Sunday, when yet another effort was made to retake the bank.

The determination to take back the bank, the hundreds, the thousands, who have put their bodies before police truncheons to defend what they have claimed as their own, is testimony to the enormous power/resonance that “okupations” can have, if created and sustained as points of passage for the making of new possibilities-subjectivities that oppose capitalist social relations through the creation of social commons.  To dismiss such movements as peripheral to what really matters, for example, working class struggles, is to forget or ignore that capitalism reproduces itself also outside the necessary but still limited relation between capitalist and labourer.  To dismiss them further because of their weakness, of their failure to spread, of their inability to resist the State, is to also forget or ignore that capitalism can be challenged in every sphere of social life, and that it is in resistance/creation that new worlds are created.

For the Banc Expropiat collective, they will return …

WE WILL RETURN TO EL BANC

Yesterday, May 23th, El Banc Expropiat was evicted by the Catalan police, after more than 160 days of resistance (more than 100 during the first campaign, and 87 days this time). The first time, the City Hall secretly decided to pay over 65.000EUR to Manuel Bravo Solano, who owns the bank, in order to avoid another Can Vies before the municipal elections. After this shady deal was exposed, the City Hall justified itself saying that they believed that the Banc had an important “social” role. They then admitted that this rent was being paid to avoid breaking the social peace, because they knew that the eviction of El Banc would imply all sorts of responses. This is what finally happened yesterday. First of all, we would like to thank all the solidarity that we have received, a solidarity which has taken many different forms and that has also meant a form of support to all the other struggles which are currently taking place.

Yesterday’s outburst of rage is not only due to El Banc, it is a consequence of recent arrests, of raids on squats and libertarian spaces, of the assassination of Juan Andrés Benítez that exposed police impunity.

We understand that some neighbours are annoyed because of the situation that the neighbourhood is going through, or the physical damages that might have suffered. But, as we’ve said many times, we will defend the Banc in every single way we can.

Anyone who has seen the police interventions can attest the violence that they have produced. Over 50 people have ended up with broken heads, knees, hands or arms as a result of their actions. This is another reason to stay where we are and try to get back to the Banc.

We will return to the Banc. 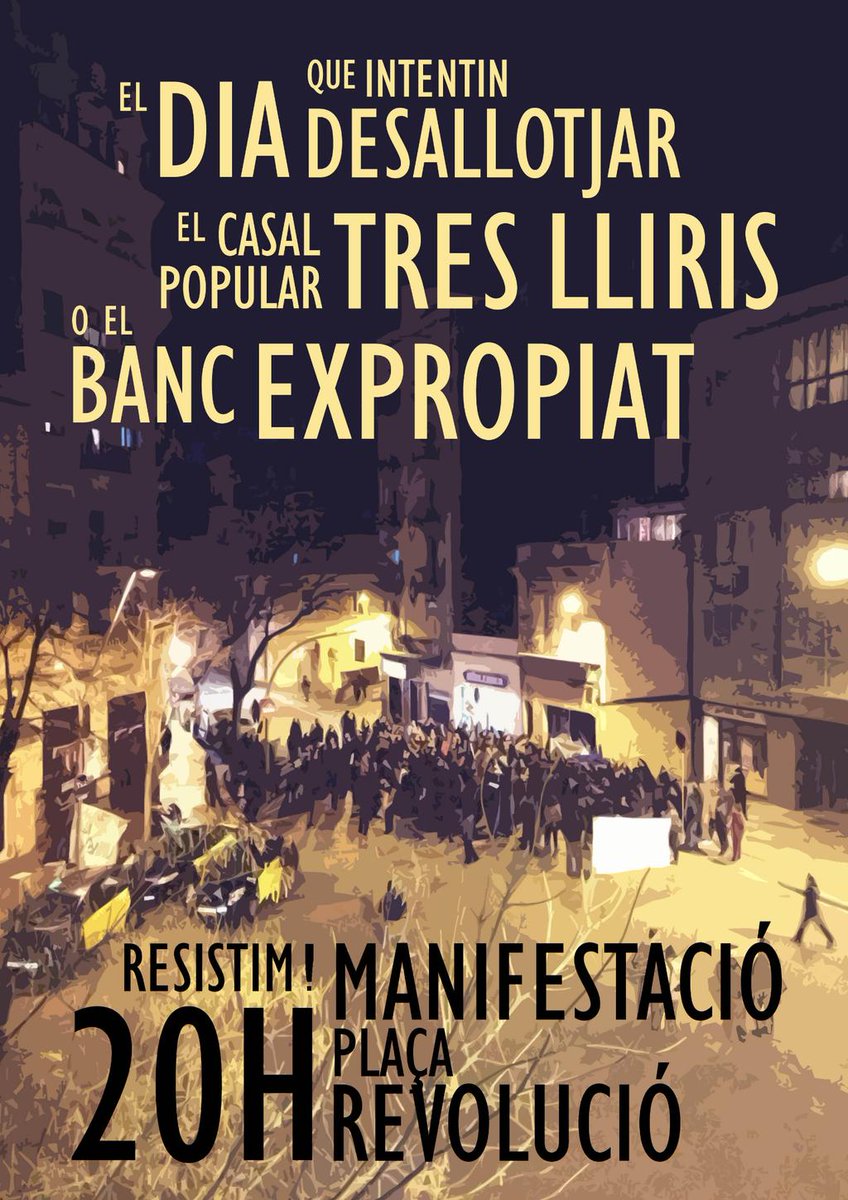 This entry was posted in Commentary, News blog and tagged Okupations, spain. Bookmark the permalink.