A house of rainbow colours: the story of Fronte del Porto Occupato (Rome)

Walls divide, segregate, displace; channel according regimes of power, direct according to apparatuses of control.  They mark lines of authority, frontiers of wealth, psychoses of fear.  Yet they may also be breached: if rebellion is transgression, then it is defined as the oblivion to walls, their violation or metamorphosis.  We share below a text from a friend on the okupied Fronte del Porto in Rome, an experiment in the questioning of walls.

Walk into this house as if it were yours, as if you were born here,

Warm up your fingers with a cup of tea and sweeten your mouth with halwa,

as if your grandmother made them for you

And before leaving, tell us, tell us the truth, that you are gharib,

that you are ashugh gharib,

that your bare feet walked the earth,

to sing our songs,

the songs of a house with a thousand and one rainbow…

How does it feel to pass by a building and to see the gates leading to the internal courtyard wide open? How does it feel to see this in a large modern city devoured by cars and by buildings that house a population that closes its doors, its gates and raises high its security walls? A city where fears reign and security is demanded. What does it mean to open up oneself, the gates of one’s house, to a city of a certain kind?

It is perhaps necessary to stress this, the type of city and the historical times, for it isn’t always and not in all places that the gates (of courtyards in this case) are closed, or that the gates exist at all. Today walling and enclosure are increasingly a living norm in urban centres. The issue at stake is not a kind of nostalgic return to an idealised past when ‘we didn’t close our doors’, but the question of whether it is possible to live free and enriching lives in a world where walls and gates are omnipresent.

In the city of Rome, walls and barriers abound. Indeed, one could weave the history of the city through its walls, from ancient Roman through Papal and to more recent ones that enclose numerous small inhabited areas. Even so called popular neighbourhoods like Testaccio can have gates that hinder the passage to the courtyards of the buildings. As for the courtyards themselves, these are invariably, in various neighbourhoods, uninhabited empty spaces dedicated to beautiful decorative plants. And nobody disturbs these plants, neither a ball kicked by a child, nor the accidental gesture of an artisan or simply a resident engaged in some form of domestic work, nor the constant and very close company of elderly people. It is against this background that a passer by of Fronte del Porto Occupato (or Porto Fluviale – not to be confused with a restaurant with same name in the neighbourhood) stops in amazement, with a sense of misrecognition. Everything seems normal, a building like any other (before the impressive murals were added), but the gates are open and… a blue boat is hanging down from the ceiling at the entrance.

Thirteen years ago, in 2003, 80 families entered the building of Porte Fluviale which belonged (and still does) to the Ministry of Defence and occupied it for the purpose of housing. The occupiers were mainly Italians, North Africans and South Americans and were coordinated by Coordinamento Cittadino Lotta Per Casa. The building which served in the past as a deposit of arms and military uniforms, was at the time lying idle. The municipality since then has been trying to sell the area to private developers.

Since the days of the occupation, the building has gone through various mutations. It decided at some point to open its front gates. It also set up a tea room on the ground floor that faces the street. The internal courtyard has a bicycle workshop, and some doors open towards rooms dedicated to the sharing of skills. The inhabitants have been reflecting upon various issues (this happens during assemblies) both internal to the cohabitation and external to the relations with the surrounding city. Their facebook page shows to some extent the activities still taking place (music, cinema, cooking and sowing workshops, bicycle repairs, book presentations, circus, etc.)

In addition to immediate housing needs that the occupation has responded to, one of the questions raised by the Porto Fluviale occupation was that of ‘walls’; not only of physical walls but walls of exclusion that take multiple forms, those of private property, those raised in front of immigrants, and those of absence of communication and of community among individuals living in the same neighbourhood or city. The question is even more acute if the building is occupied. Cconsidering that the latter is illegal, how to avoid not simply closing the gates but almost barricading oneself in fear of eviction? This ‘experiment’ generated further interest among architecture students of the University College London and a project was elaborated in 2012, organised and carried out by them and the residents. The link that follows leads to an excellent account of the place, of the project, of its opportunities and limits: Rome Occupation City.

In 2013, something else was added to the building; the walls were covered with the colours of the rainbow. An amazing mural was done by a graffiti painter nicknamed Blu. The graffiti of Blu has attracted the attention of two Italian newspapers. The article of La Repubblica was sadly ignorant, attacking ‘the abusive and violent residents’. But the article of il Manifesto is very much worth reading (in Italian).

Blu’s mural on the facade of Fronte del Porto Occupato renders it porous; the windows becoming eyes, through which to see and be seen.  The challenge of all okupations is to remain spatially liminal, neither enclosing nor vanishing, neither claiming a new sovereignty, nor giving in to the older.  Spatial limits thus lived as temporary, a threshold upon which freedom is played out. 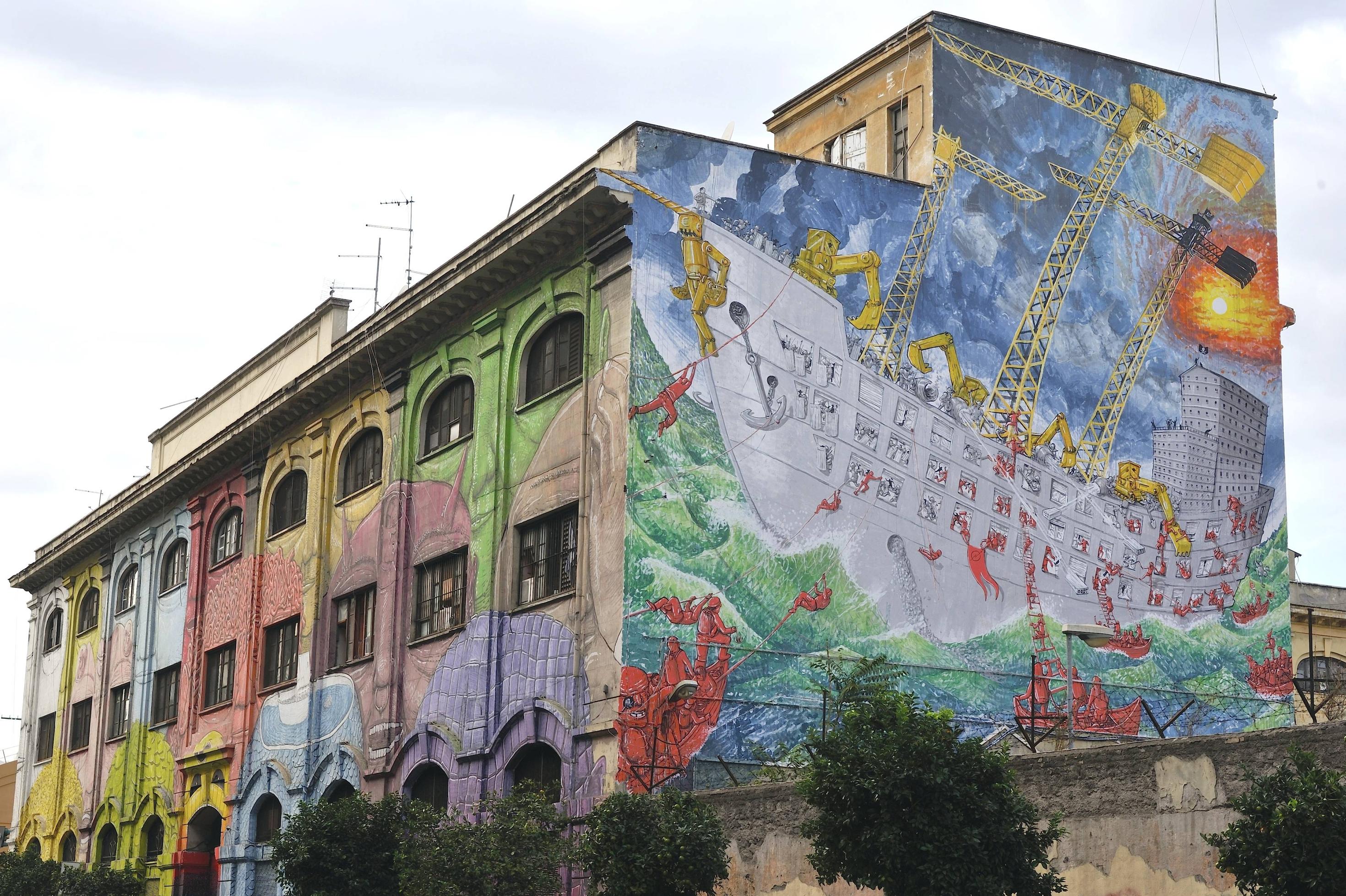 This entry was posted in Commentary and tagged italy, Okupations. Bookmark the permalink.