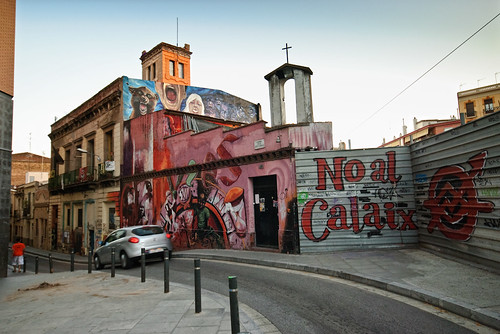 An okupied social centre is a form of direct action against State-Capital. It is a refusal of the sacrosanctity of private property and of the authority which oversees its protection. It is a making common that which is held privately for the benefit of the few and it is a making common autonomously, collectively, through self-management.

Such social centres are experiments in self-management, no less significant than workers councils or rural communes; a self-management that includes not only the life of those who participate in the okupation, but transversally, all of the collectives, associations, groups and individuals that move through them.

Social centres are spaces for creating non-authoritarian social relations, that embrace many of the facets of life of those who are a part of them; where those relations that sustain capitalism are questioned, parodied, subverted, rejected, generating thereby new radical subjectivities. Open onto the broader spaces and times with which they interact, they form nodes in potentially expanding networks of rebellion and invention.

An okupied social centre is not a physical structure, however much it begins with a physical occupation. It is above all a way of life that can permeate, resonate, touch and even mould those in other spaces. The okupied social centre thus becomes a neighbourhood, a city; rebellious spaces in the heart of privatized, surveilled and controlled urbanisation.

As the rebellion grows, the State does not hesitate to attack it.

On the 26th of May, police in Barcelona carried out the eviction of the Centre Social Autogestionat Can Vies in the neighbourhood Sants. Threatened by an eviction order since April, the 17 year old social centre was at the heart of the neighbourhood’s and the city’s social movements. And accordingly resistance followed, first from those in the building, then since Monday, in Sants, and for four days, to other neighbourhoods in Barcelona, and other cities in spain.

On Friday, the authorities of Barcelona suspended the destruction of the building that housed Can Vies. And the response of those collectives and sympathisers: to begin to rebuild. 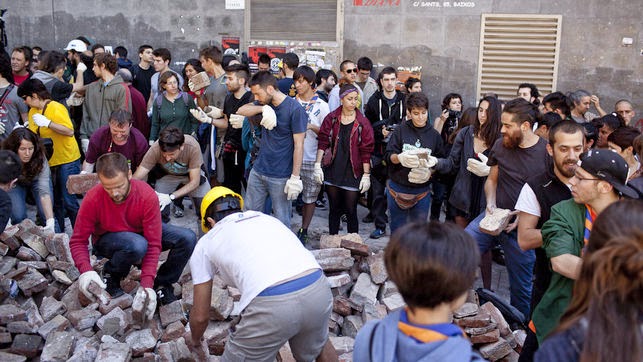 The rebellion is permanent.

This entry was posted in Commentary, News blog and tagged Occupations, Okupations, spain. Bookmark the permalink.