The pacifying state: Spain and the laws against rebellion 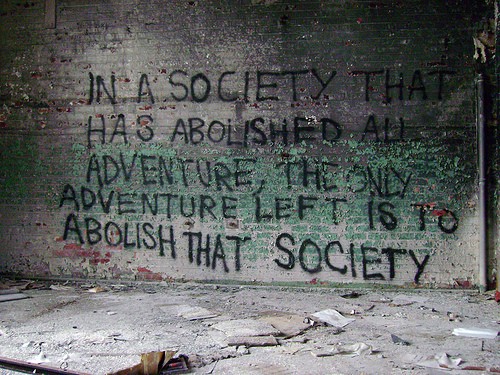 The State’s power is fundamentally rooted in its ability to define the limits within which its sovereignty is exercised; a power that rests upon the State’s ability to simultaneously stand outside those very limits.  This paradox is at the very heart of sovereignty, Carl Schmitt has taught us.  Accordingly, the law rests upon a state of exception; the state of exception that lies beyond the law, while simultaneously grounding it, and the state of exception that suspends the law for its protection or creation.  This latter, while supposedly exceptional, has become the norm; as it always was for the oppressed classes.  The lesson to be taken from this, as Walter Benjamin so presciently saw, is that against the State, an exceptional politics of rebellion is called for.

Within the legal reign of exception, the will of the sovereign exists in and through the instruments and apparatuses that comprise the State machine.  The State is not a singular agent, but a machine which captures techniques of control that in their application are law making.  The State, in a permanent state of emergency, works through/is its instruments of surveillance and control, mastering/creating in this manner a multiplicity of social relations, rendering them domesticating and dominating.

Protest, rebellion thus demands escaping, appropriating and profaning, breaking and subverting those relations.  15M, over the course of its short history, along with other social movements in spain, have demonstrated a remarkable creativity and resilience in so challenging these relations.  The Spanish authorities have not however resisted the temptation of deploying much their arsenal of government against the movement: harassment, arrests, fines, violence. The only thing remaining would seem to be the physical destruction of the movement itself.  But such an exercise would be enormously complex and fraught with some risk.  The authorities seem to have chosen a different path, that of legal reforms.

The spanish ministry of the interior has elaborated a reform of the country’s Ley de Seguridade Ciudadana (Law of Citizen Security) seemingly made to measure against many of the tactics and strategies deployed by 15M.  (Periodico Diagonal 14/10/2013) Should the proposed reform be approved, the following acts come to be considered “very gave infractions” subject to fines between 30.001 and 600.000 Euros: the recording and diffusion of images of security force agents in the exercise of their functions which violate their right to their honour and their image and which may put into danger their security or the corresponding police intervention; the grave disturbance of order in public, religious, sporting, entertainment events, or events of other types; demonstrations not communicated to institutions of the State; demonstrations not communicated or prohibited before critical infrastructures, such as nuclear power stations, or airport runways; escraches or protests against individuals who hold public office.  “Grave infractions”, which would include fines ranging from 1.000 to 30.000 Euros, include the following: disturbing public order, masked or with any other element that renders identification difficult; threats, coercion or insults directed against the agents of public security when they are working for the maintenance of public order; vandalism; obstructing public roads with tires or other objects; climbing public buildings in acts of protest. … The list is not complete.  And all of this in the wake of the recent proposed reform of the spanish penal code, soon to go to vote in the country’s congress, which identifies as crimes, or reinforces the penalty for: the public diffusion of messages that incite to illegal actions, such as cause public disturbances, violations or disobedience to public authority, public disorder. (Elpais 14/09/2012)

The response of those who animate 15M: disobedience!

This entry was posted in Commentary, News blog and tagged 15M, spain. Bookmark the permalink.