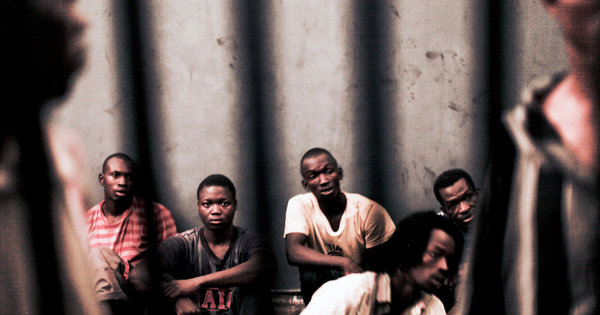 The following letter, addressed to EU authorities, is in response to the increasing Moroccan state persecution of sub-Saharan african acitivists, working to defend the rights, interests and desires of sub-Saharan migrants.  The letter is posted at http://openlettereu.blogspot.com/, where a petition and contributions can also be made.  Further information on the issue can be found at Mamfakinch and the Association Marocaine des Droits Humains.

The European Union, which you represent in one way or another, was awarded the Nobel Peace Prize in 2012. We congratulate you. It is, however, your responsibility to remain worthy of it.

For about twenty years, following the introduction of the Schengen Agreement and the control of the European Union’s external borders, your institutions have placed an increasing amount of pressure on countries such as Morocco so that they may help you prevent immigration into Europe. Your insistent pressure has led to the adoption of Law No. 02-03 on the entry and residence of foreigners in Morocco, widely recognized as non-compliant with international standards, including the International Convention on the Protection of the Rights of All Migrant Workers and Members of Their Families (which your Member States did not see fit to ratify…) and the 1951 Convention relating to the status of Refugees. If your efforts to have Morocco sign a readmission agreement have not yet been completed, you still continue to fund, to the tune of tens of millions of euros, border control projects in Morocco. These projects include the construction of barracks, and equipment sent to various security organs used to ensure the control of the Moroccan-Spanish border. You also financed the construction of fences surrounding the Spanish enclaves within Moroccan territory – and the deadly events in Ceuta on September 29, 2005 have shown, in a very concrete way, the dark side of your migration policy.

Moroccan citizens – unlike you – have no illusions about how the Moroccan authorities are treating the rights, physical and moral integrity of the migrants who are on Moroccan soil. Torture and inhumane prison conditions are commonplace, as recognized by an official body, the National Council for Human Rights. This has also been confirmed by Juan E. Méndez, UN Special Rapporteur on torture, at the end of his recent visit to Morocco. “Severe beatings, sexual violence, and other forms of ill-treatment appear to be on the rise,” Mr. Méndez said. “I urge the authorities to take all necessary measures to prevent further violence and to investigate reports of violence against sub-Saharan migrants.”

The situation of sub-Saharan migrants in Morocco, is aggravated by the endemic racism among representatives and agents of the Moroccan state, especially the police. In order to cope with this situation, many sub-Saharan students, workers, traders have come together in different associations to defend their rights and dignity in Morocco.

Two weeks ago, Moroccan authorities launched a wave of arrests and deportations against hundreds of sub-Saharan migrants including women, children and refugees. This offensive has also affected different sub-Saharan organizations in Morocco. Several members of the Association Against Illegal Immigration in Morocco (ALECMA) were violently apprehended on October 17, and its secretary-general, Pascal Mpele, arrested on October 20 in Rabat. They were later deported to the border with Algeria. The same day in Rabat, the former chairman of the Council of sub-Saharan Migrants in Morocco (CMSM), Camara Laye, was arrested on wild charges (see FIDH’s press release) of illegal sale of cigarettes and alcohol, despite the total absence of any physical evidence against him. Earlier that same month, the apartment of an activist working with the Sub-Saharan Communities in Morocco (MSAC) was broken into. The unidentified burglars, surprisingly, were only interested in his computer hardware and materials used for his activism. Then, from October 29 to 30, about thirty sub-Saharan activists were arrested in various cities in Morocco. They were transported and grouped at the police headquarters in Oujda, a city bordering Algeria. The aim of the authorities, as it was for Pascal Mpele, was to release them at the Moroccan-Algerian border and force them into Algeria–their most common method for getting rid of migrants.

Listen to what Mr. Eric William, a Cameroonian citizen, had to say about his arrest on October 29 in Rabat:

“I was arrested yesterday at 6pm in Rabat, while I was buying some cakes in a grocery store. It happened just after I attended the trial of Camara Laye. The police who arrested me were all in civilian clothes. Nobody told me the reason for my arrest nor showed me a warrant signed by a judge. I did not resist my arrest.

“Once they took me inside the police van, the beatings started. I realized that many other comrades were arrested too. Racist insults started as well. Among the officers who arrested me, I recognized one who was present at the trial of Mr. Camara and was filming those present and the placards brandished by the friends of the accused.

“I was then transferred to a police station in Rabat and immediately questioned by a police officer. My interrogation was violent. Each time I asked for an explanation of the reason for my arrest, I was greeted with punches and truncheon-blows on my whole body, including racist insults. At no time did I appear before a judge.

“After a few hours, they presented me with a police report that I refused to sign. Each protest was followed by punches that came from all sides. The report was in Arabic. At no time did they make an attempt to translate the content of the paper. The same evening we boarded a bus. We spent the night on the way to Oujda…

“Nobody explained the reason for our presence here in Oujda. We are about thirty people in the police headquarters. We were given nothing to eat since yesterday. We do not know what will happen to us in the coming hours …”

Since then, Eric and his fellow prisoners have all been transferred from Rabat and Casablanca to Oujda, held at police headquarters in this city without food or water. They were then transported overnight and handcuffed to military barracks situated along the Algerian border. They were forced to sit on the ground throughout the day and night, in the wind and rain, without food or water, before members of the Moroccan military forced them, around 1:30 am, to walk toward the Algerian border. Once at the border, border guards turned away at the sound of Algerian warning shots. The group of sub-Saharan African migrants went back into Morocco, and took refuge in the vicinity of Oujda, where members of Moroccan civil society brought them food and drinks.

You wish that Moroccan authorities help you prevent illegal immigration into Europe–well, assume the consequences. The consequences are named Pascal Mpele, Camara Laye, and Eric William, and their companions in misfortune. It is in your power, through the strategic partnership and political dialogue between the EU and Morocco, to remind officials of the need to respect international law, Moroccan law, and human dignity in their treatment of sub-Saharan migrants in Morocco. Your silence is complicity.

You are aware that granting an advanced status to Morocco must be accompanied by a requirement to consolidate the rule of law and the respect for human rights, including those of migrants. This must be an essential element of the relations between your union and Morocco.

We, the signatories of this letter, vigorously denounce your migration policy on the sudden shore of the Mediterranean and solemnly urge you to reconsider it. It is time to recognize the failure of an obscure policy conducted in close cooperation with North African states, who are destined to play the role of the “gendarmes of Europe”, in total disrespect of human rights, including those of Sub-Saharan migrants.

You were awarded the Nobel Peace Prize. Show yourself worthy of it.

PS: All the above does not in any way exonerate the Moroccan state from its legal and moral obligations. This is even more true that a media campaign was initiated this week by the magazine Maroc Hebdo–considered close to the authorities–, in an apparent attempt to justify police raids against sub-Saharan migrants and militants. The weekly’s latest cover reads: “The Black Peril.”

This entry was posted in News blog and tagged migration, morocco. Bookmark the permalink.